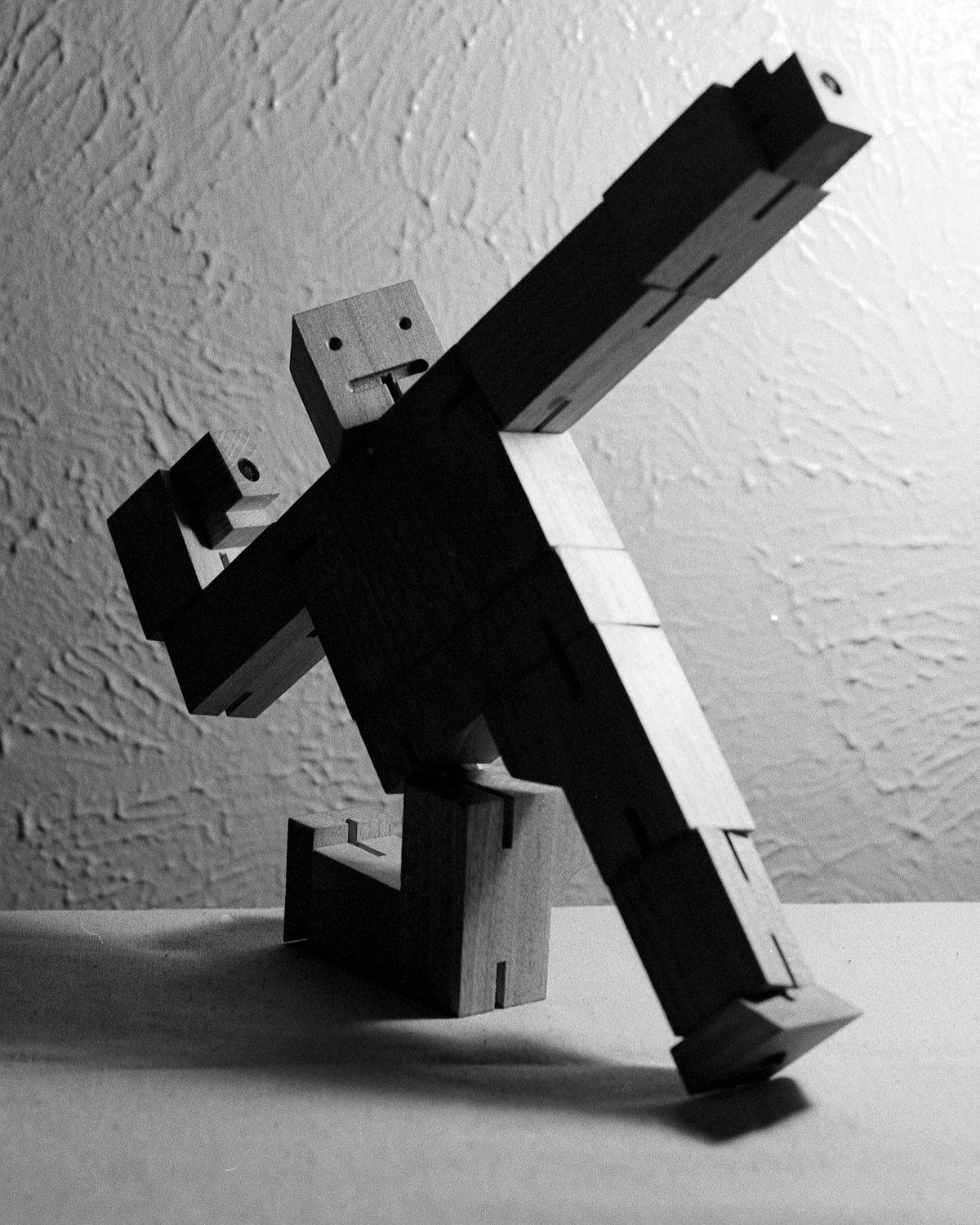 Of Robots and Equipment Failure

I had fun with the photos this week, but they're nothing special. There's a reason for that. I didn't take these pictures for art, I took them for science. Good thing I had a sweet wooden robot that my friend Dana gave me.

You see, the magazine on my Hasselblad appears to have issues. That's the part into which you load the film; it also controls the spacing between frames. Sometimes (and only sometimes, because if it was predictable it would be easy and heavens we can't have that) it overlaps two frames or, alternately, places all the frames ridiculously far apart from each other.

Before I took yet another piece of my camera to be serviced, I wanted to put a roll through and see if the problem would manifest again. That's where cube-bot comes in. 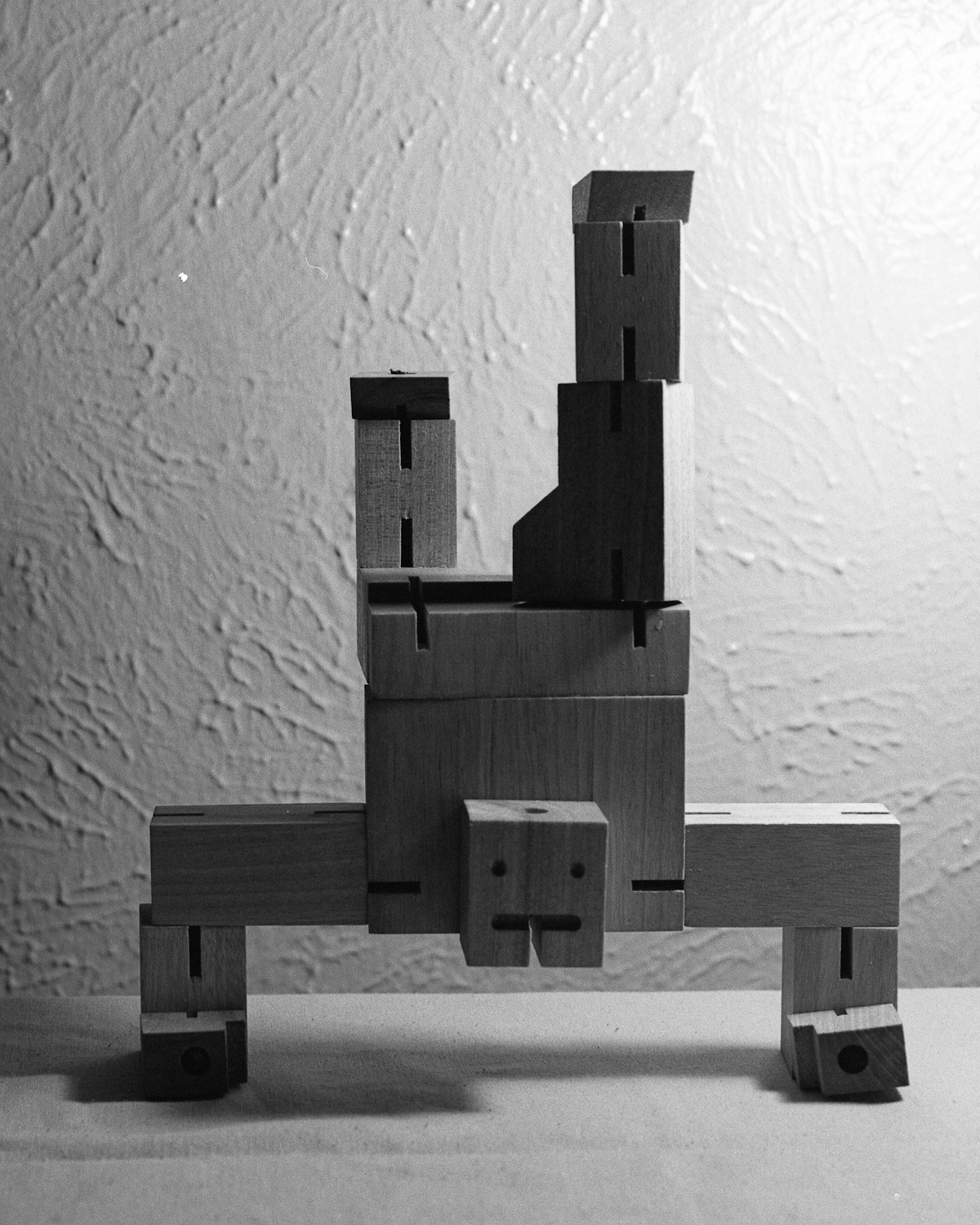 So this week I don't have any really interesting shots to share, just some black and white pictures of a robot toy made out of wood and elastic bands that was given to me by my friend Dana.

It's pretty cool, though. Dana was the first friend I made in Austin and during the 13 years I've known her, she's never given the wrong answer to the question "how does Tate feel about toys that look like robots?"

(The answer is "he likes them very much thank you.")

What did Cube Bot teach me? Not much, sadly. No major issues with the frames, but they were still spaced apart from each other pretty crazily. So I took it in earlier today and probably won't be able to use my camera for weeks. Also, he taught me that I still hate the walls in my apartment. 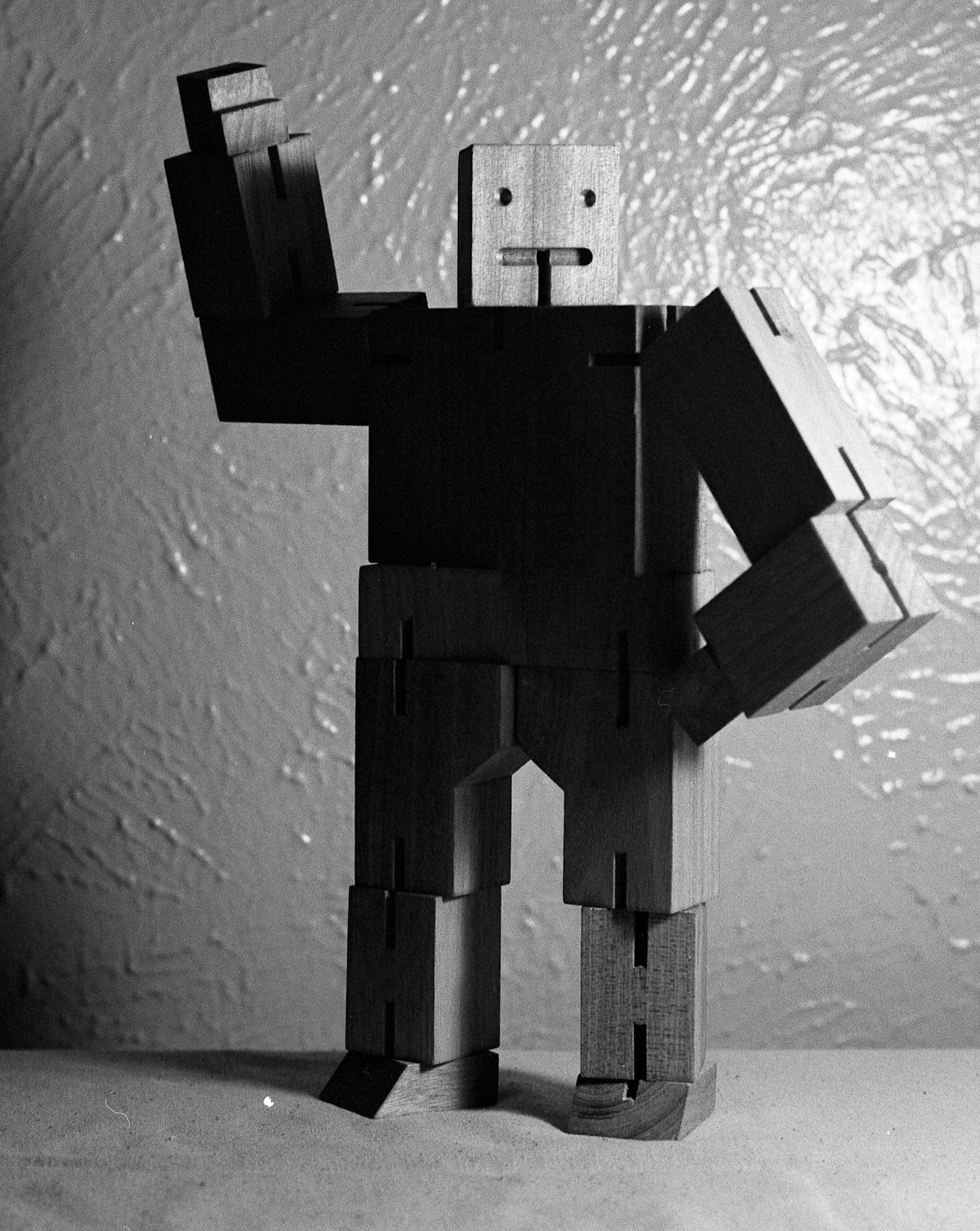 But I can't actually say I'm all that upset about not being able to use the camera for a while. The thing has been a lot of fun but also a lot of stress. It's going to take me years to get fully comfortable with it, and until then I'm going to continue to frustrate myself.

Anyway, Cube Bot thanks you for stopping by. He can't calculate much, being made of wood, but he generally does what he's told. Also, as wood is an organic material, he's technically more closely related to humans than he is to robots of the metal flavor; this is good news for us if (when) the robots revolt. 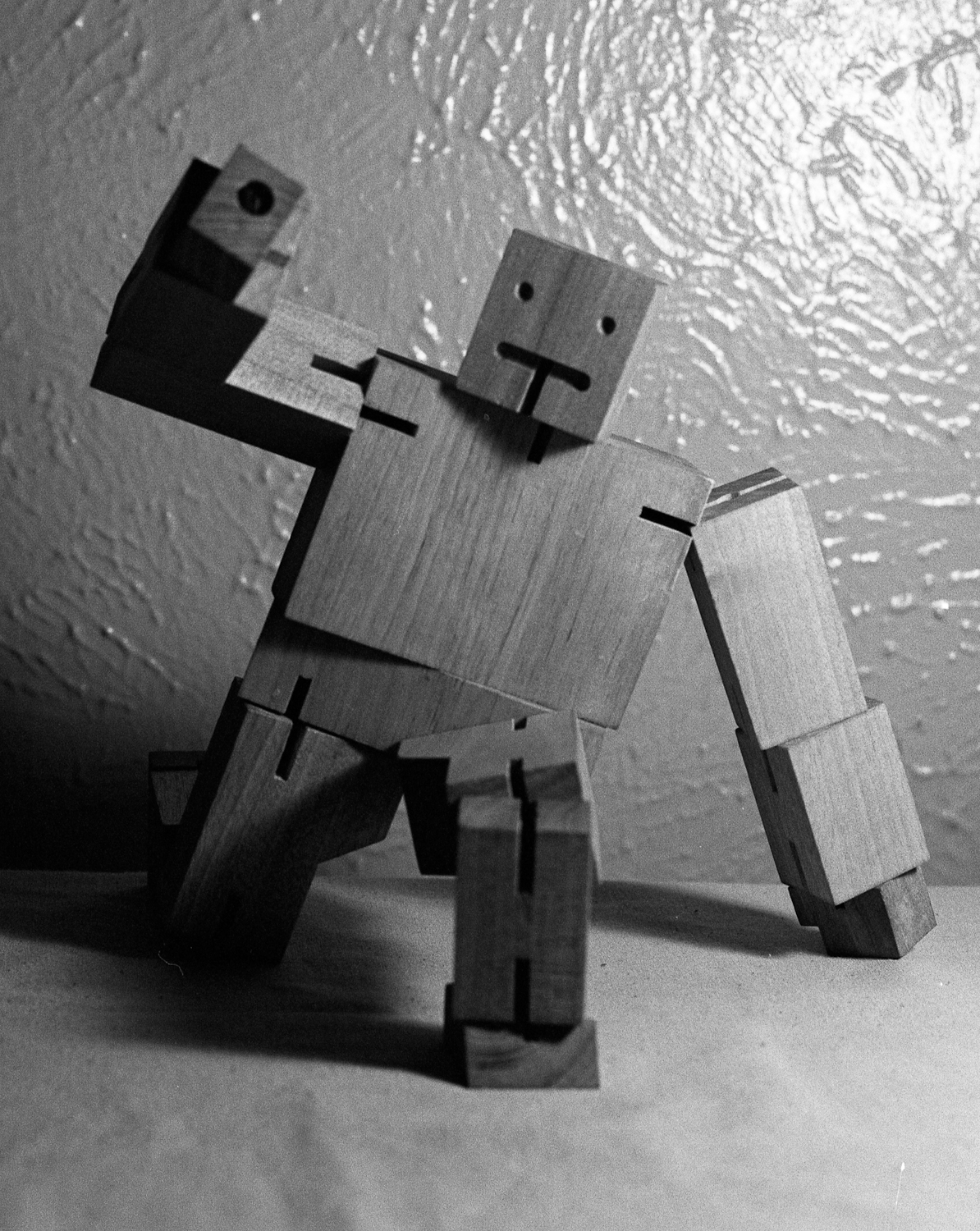 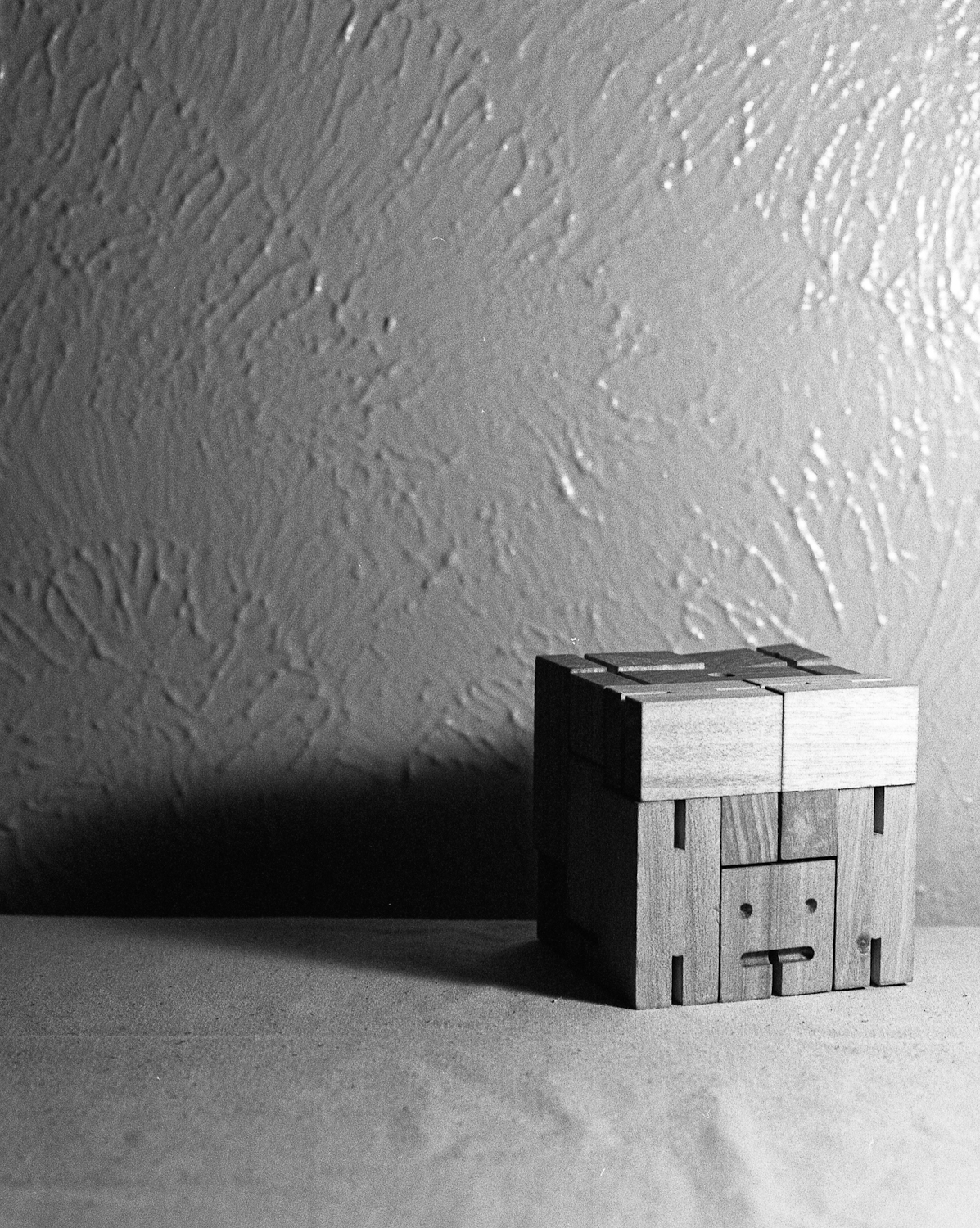 Tate
Austin, Texas
I pay the bills writing software documentation. I make movies; sometimes they play festivals and win things, and sometimes they don't. I don't claim to be any sort of authority on photography, but I enjoy it and I'd like to get better.